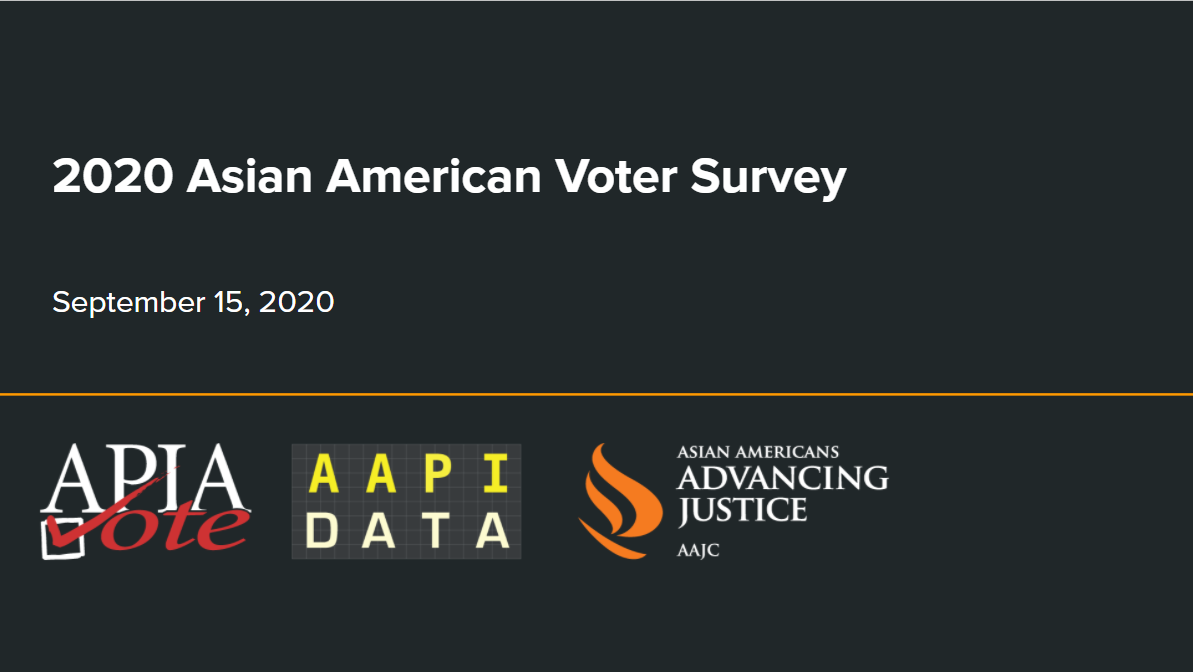 Washington, DC — Asian Americans Advancing Justice – AAJC, Asian and Pacific Islander American Vote (APIAVote), and AAPI Data release today the results of a 2020 survey on Asian American attitudes on issues from the upcoming election and discrimination in America to healthcare concerns around COVID-19 and support for affirmative action.

The organizations will share the 2020 Asian American Voter Survey data, which polled 1,569 Asian American registered voters, during a press call and briefing on Tuesday at 1:00 pm EDT.  As the Asian American electorate continues to grow, the group stands to play a significant role in political races at the national, state, and local levels. Yet, most Asian American voters are still reporting little to no outreach from either political party.

“The survey shows that more than half of voters are reporting little or no contact from either major party,” said Christine Chen, Executive Director of APIAVote, “Asian Americans are the fastest-growing racial group in the country and we’ve seen voters make an impact at the polls. According to the data, 54% of Asian American voters plan to vote by mail or absentee, meaning we need to make sure voters are requesting their ballots, voting early when possible, and given access to any language assistance they are entitled to. Campaigns must make investments to engage this key voting bloc as we work to make sure voters are prepared to cast their ballot this November.”

“Asian Americans saw a record high level of midterm election turnout in 2018,” said Karthick Ramakrishnan, professor of public policy founder and director of AAPI Data, adding that “with a majority saying that they are even more enthusiastic than usual about this election suggests that we will see record turnout for Asian Americans for a presidential election in 2020.”

“Through this survey we see that Asian Americans are ready to exercise their power to vote in person or by mail so it is imperative that we step up our language access efforts and encourage jurisdictions to give our communities every opportunity to access the ballot box,” said John C. Yang, Advancing Justice – AAJC president and executive director. “Voting isn’t the only issue top of mind for Asian Americans, we also see an increase in support for affirmative action since our 2018 survey. In addition, at least 2 out of 3 people view immigration as extremely or very important in the election, with majorities supporting expanding access to health coverage to all people regardless of immigration status, and a pathway to citizenship for undocumented immigrants.”

Support for affirmative action and immigration were not the only areas of interest for Asian Americans. The survey data provides a clear snapshot on how Asian American voters feel about several different issues, including Gun Control, Healthcare, Jobs and the Economy.

“These new data demonstrate that, despite considerable diversity by ethnicity, the Asian American community is largely united when it comes to support for the social safety net, environmental protection, and gun control,” Janelle Wong, senior researcher at AAPI Data noted. “Organizations working on these issues need to make sure they include Asian Americans in their outreach,” she added.

AAPI Data is a nationally recognized publisher of demographic data and policy research on Asian Americans and Pacific Islanders, with hundreds of news mentions in national and local outlets. Its reputation is built on data and research that is accurate, compelling, and timely. More information at https://aapidata.com/

APIAVote is a national nonpartisan organization that works with partners to mobilize Asian American Pacific Islanders in electoral and civic participation. APIAVote envisions a world that is inclusive, fair, and collaborative, and where Asian American and Pacific Islander communities are self-determined, empowered, and engaged. See our website for more information at https://www.apiavote.org/

Asian Americans Advancing Justice – AAJC has a mission to advance the civil and human rights of Asian Americans and to build and promote a fair and equitable society for all. Visit our website at advancingjustice-aajc.org